To compensate for the adverse ecological conditions, the Harappans first settled sites along the Indus river. (Fairservis 1987:48) The Dravido-Harappans occupied over 1,000 sites in the riverine Indus Valley environments where they had soil and water reserves. The Harappan sites are spread from the Indus Valley to Ai Kharnoum in northeastern Afghanistan and southward into India. In Baluchistan and Afghanistan Dravidian languages are still spoken today. Other Harappan sites have been found scattered in the regions adjacent to the Arabian sea, the Derajat, Kashmir, and the Doab.

The Indus region is an area of uncertain rains because it is located on the fringes of the monsoon. Settlers in the Indus Valley had to suffer frequent droughts and floods. Severe droughts frequently occurred in the Indus Valley so the people dug wells to insure for themselves a safe supply of water.

To compensate for the adverse ecological conditions, the Harappans settled sites along the Indus river.

They were a riverine people that practiced irrigation agriculture. They had both the shaduf and windmills.(Fairservis 1991) In the Harappan sites domestic quarters and industrial areas were isolated from each other.

The Dravido-Harappans occupied over 1,000 sites in the riverine Indus Valley environments where they had soil and water reserves. The Harappan sites are spread from the Indus Valley to Ai Kharnoum in northeastern Afghanistan and southward into India. In Baluchistan and Afghanistan Dravidian languages are still spoken today. Other Harappan sites have been found scattered in the regions adjacent to the Arabian sea, the Derajat , Kashmir and the Doab. 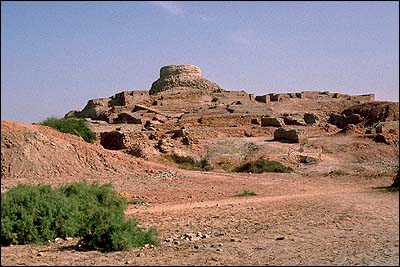 The Harappan sites are small and occupy only a few acres with little depth. This suggests that the Dravidian speaking colonists settled the Indus Valley over a period of a few decades. Fairservis has shown that the site of Mohenjodaro was occupied for around 200 years.

Many archaeologists are beginning to accept the fact that the Harappan civilization was founded elsewhere and taken to the Indus Valley by the Harappan people.

The Sumerians called the Indus Valley: Dilmun or Tilmun according to Sumerolo- gists S.N. Krammer in The Sumerians:Their History, Culture and Character. Other specialist have begun to popularize the idea that the Indus Valley was called Meluhh- a, because of the Aryan mention of Meluhhaites in India when they arrived. There were Meluhhaites in India living along the Ganges, but these Meluhhaites were settled in India after Sestrosis I, of Egypt conquered the Ganges region. It was also around this time that the Egyptians established colonies in Colchis near the Black Sea.

During the times of Sargon the Great of Sumer, Dravido-Harappan ships from Dilmun were anchored at Agade docks in Mesopotamia. The ships of Dilmun exported gold, copper utensils, lapis lazuli, ivory, beads and semiprecious stones. 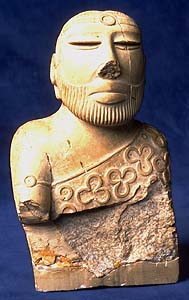 The Harappans were find engineers and craftsmen. They built large cities with complex drain systems under the streets of some of their cities.

The Harappans cultivated wheat, barley and millet. They had domesticated sheep/- goats and cattle.

Mainly sedentary pastoralist, the Harappans had a highly developed grain storage system. The main cities of the Harappan civilization were Mohenjodaro, Harappa, Chanhudaro, Kalibangan and Lothol. These cities, and the towns, were built on a regular plan of straight streets. The buildings were made of kiln-burned mud bricks. 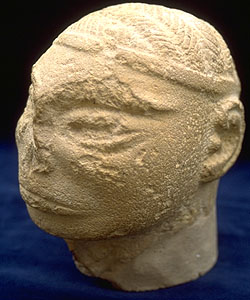 Each house contained several rooms plus bathrooms and storage areas. A court yard was placed in the middle of most Harappan homes surrounded by the living quarters.

In the center of each city there stood a citadel surround by a wall.This citadel appears to have been a religious center.

The recent discovery of the site of Manda, in the Himalayan foothills points out the Harappan control of the Himalayan timber. Gumba, another Harappan site might have been the trade terminal for the export of metals, minerals and timber from Afghanistan and the former Soviet Central Asia.

The Dravidians built the first major port in Lothol. Lothal was situated at the head of the Gulf of Cambay in Gujarat. Here archaeologists have found large warehouses ready to hold goods for export.

At Mohenjodaro, the streets were paved with bricks. The windows of the houses faced interior courtyards not the street. The site of Mohenjodaro was occupied for 200 years.

Kalibangan, situated on the southern bank of the Ghaggar, now a dry bed, in ancient times was a large river. The people here lived in multi-storied buildings, and had streets large enough to carry carts, similar to those that are used in the Sind today.

There were also Proto-Dravidian/Harappan colonies in Central Asia, established in Eastern Bactria. The Harappans had trade relations with the Namazga V site. Masson has proposed that the Altyn-Depe people spoke Proto-Dravidian.

The Proto-Dravidian of the Harappan civilization controlled the trade of Central Asia. The major Harappan colony in this area was Shortughai, situated at the conflu ence of the Amou Darya and the Kokcha river. Shortughai flourished between 2500 and 1800 B.C.

Due to changes in the environment of the indus Valley much of the area became more arid. This led to many Harappans migrating out of the Indus Valley into India, to settle sites in Gujarat, Punjab, Haryana and other parts of western Uttar Pradesh between 1700-1000 B.C.

It was in Gujarat, that the Dravidians probably first came in contact with the Aryans. Here we find examples of the plain grey ware (PGW) used by the Indo-European speaking peoples of India.

After 1700 B.C., with the end of the Harappan culture BRW spread southward into the Chalcolithic culture of Malwa and Central India, down to northern Deccan and eastward into the Gangetic Basin.

The users of the BRW of Gujarat between 1700-100 B.C., were in communication with the Dravidians of the Malwa culture. The BRW people of the Malwa culture occu pied the Tapi Valley, Pravara Godavari and the Bhima Valleys. As a general rule the BRW horizon precedes the PGR periods. The PGR period is associated with the Indo- Aryan speakers. (Singh 1982)

Here on the Gangetic plain we see the emergence of PGW. The presence of PGW points to the probable first contact between the Proto-Dravidians and Indo-Aryans.

The Harappan religion was polytheistic. They used cattle, elephants and other animals to represent their gods. The Harappan seals are amulets addressed to the Harappan gods. 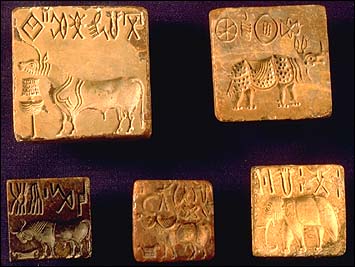 Seals have been found in almost every room at Mohenjodaro. Many of Indus seals were found in a worn condition and show signs of repair. Archaeologists have found holes on the back of the seals that indicate that the Harappans wore them tied around their neck or ankles with a string. 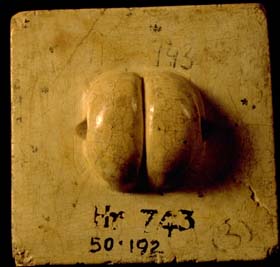 Perforated boss on the back of Harappan seals

Winters,Clyde Ahmad, "The Unity of African and Indian Agriculture", Journal of African Civilization 3, no1, (1981a),page 103.

Winters, Clyde Ahmad, "The Proto-Culture of the Dravidians ,Manding and Sumerians", Tamil Civilization 3, no1 (March 1985a) ,pages 1-9.

Winters,Clyde Ahmad Winters ,"The Dravidian Origin of the Mountain and Water Toponyms in central Asia", Journal of Central Asia 9, no2 (1986d), pages 144-148.